Not the same strain of coronavirus that originated in Wuhan...

Not the same strain of coronavirus that originated in Wuhan…

⤺ reposted by @themike27 from But what the hell is it to retaliate against ordinary people?

Do we have any idea how she got it, where it came from if it’s a different strain?

Labor Secretary Silvestre Bello 3rd on Thursday said a Filipino woman working in Dubai died after being infected with a coronavirus. Bello said the Pathology and Genetics Department of Dubai’s Health Authority has yet to determine if the woman was...

Chinese doctor Li Wenliang, who was accused of spreading rumors after trying to warn colleagues about coronavirus, has died of the illness - Sina/GT [Reddit]

This guy tried to do the right thing, tried to save lives as what any doctor should be doing to begin with. But the treatment he gotten was undeserved. He died trying to do the right thing, he died trying to save countless lives. The hundreds of deaths, and the thousands more to come potentially, could all have been avoided if people heeded his warnings.

This Chinese doctor tried to save lives, but was silenced.

On December 30, Li Wenliang dropped a bombshell in his medical school alumni group on the popular Chinese messaging app WeChat: seven patients from a local seafood market had been diagnosed with a #SARS-like illness and quarantined in his hospital.

Li explained that, according to a test he had seen, the illness was a #coronavirus – a large family of viruses that includes severe acute respiratory syndrome (SARS).

Memories of SARS run deep in China, where a pandemic in 2003 killed hundreds following a government cover up. “I only wanted to remind my university classmates to be careful,” he said.

He told his friends to warn their loved ones privately. But within hours screenshots of his messages had gone viral – without his name being blurred. “When I saw them circulating online, I realized that it was out of my control and I would probably be punished,” Li said.

Soon after he posted the message, Li was accused of rumor-mongering by the Wuhan police. He was one of several medics targeted by police for trying to blow the whistle on the deadly virus in the early weeks of the outbreak.

His diagnosis has sparked outrage across China, where a backlash is growing against state censorship around the illness and an initial delay in warning the public about the deadly virus.

On the same day in December that Li messaged his friends, an emergency notice was issued by the Wuhan Municipal Health Commission, informing the city’s medical institutions that a series of patients from the Huanan Seafood Wholesale Market had an “unknown pneumonia.”.

Later that day, the Wuhan authorities announced the outbreak and alerted the World Health Organization. But Li’s troubles did not end there.

On January 3, Li was called to a local police station and reprimanded for “spreading rumors online” and “severely disrupting social order” over the message he sent in the chat group.

Li had to sign a statement – acknowledging his “misdemeanor” and promising not to commit further “unlawful acts.”

He feared he was going to be detained. “My family would worry sick about me, if I lose my freedom for a few days,”

He was hospitalized on January 12. In the following days, Li’s condition deteriorated so badly that he was admitted to the intensive care unit, and given oxygen support.

The police announcement was broadcast across the country on CCTV, China’s state broadcaster, making it clear how the Chinese government would treat such “rumormongers.”

On January 31, Li wrote in a post on Weibo how he felt during that period: “I was wondering why (the government’s) official notices were still saying there was no human-to-human transmission, and there were no healthcare workers infected.”

Now, the virus has spread to every region in the country, including the far western frontier of Xinjiang and the remote region of Tibet.

“If Wuhan had paid attention to [his warning] back then and taken active preventive measures,” wrote another Weibo user, “where we stand now a month later could be a completely different picture.”

Li has died of the coronavirus illness.

A senior Chinese official has ordered the authorities in the city of Wuhan to immediately round up all residents who have been infected with the coronavirus and place them in isolation, quarantine or designated hospitals.

“Set up a 24-hour duty system. During these wartime conditions, there must be no deserters, or they will be nailed to the pillar of historical shame forever” - Sun Chunlan 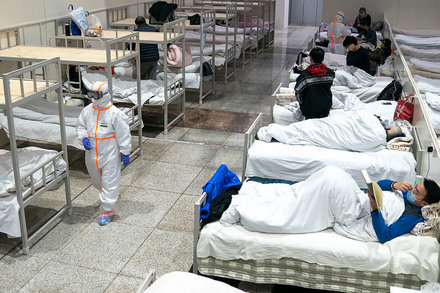 Wuhan Rounds Up the Infected as Death Toll in China Jumps

Health officials are focusing on faster diagnoses of the coronavirus. A Chinese doctor who warned of the outbreak has died.

Dubai just reported that a woman from the Philippines has died in the UAE because of the Novel Coronavirus. In response, the UAE has suspended flights to China. The Manila Times reported the death, citing the Philippines’ labor secretary.

Labor Secretary Silvestre Bello 3rd on Thursday said a Filipino woman working in Dubai died after being infected with a coronavirus. Bello said the Pathology and Genetics Department of Dubai’s Health Authority has yet to determine if the woman was...

Anyone else feels they are ahead in information compared to family and friends?

#International [WHO: New pneumonia is not a “global epidemic”]

A new type of coronavirus originated in China has spread to at least 24 countries in the world in a short period of time. The head of the WHO infectious disease hazard management department, Bryant said on Tuesday (4th) that the new pneumonia is not a “global epidemic” Also denies that the virus is changing and mutating as it spreads, emphasizing that the new coronavirus is still a stable virus

THANKS TO YOU ARIES,
I’M AHEAD OF EVERYONE!! INCLUDING CNN.

If you have a first responder

or Doctor in the family they belong in here

Canadians, get out of China by any means possible: foreign affairs minister – National Post

A person in Texas is being tested for coronavirus, Beaumont public health officials announced. The patient is a man who recently went to China and has since developed flu-like symptoms, according to Click2Houston. In addition to the 12 confirmed cases of coronavirus in the US, the Centers for Disease Control and Prevention is testing 76 people for the infection that has killed more than 560 people worldwide. The latest suspected case comes as a twelfth American - a person in Wisconsin - was diagnosed with the deadly virus that’s spread rapidly since appearing at a seafood market in Wuhan, China. See exactly what to buy if you're not already prepared, the latest rational news, scenario models, and more.

Keep me updated, im being stationed in a hospital 02MAR2020 As the novel coronavirus outbreak continues to unfold here in China, I have been glued to my cellphone for updates every waking hour. Many valuable posts and video clips get deleted only a few hours after being released online, so people have to make...

This is from Feb 3

I can’t make any promises, because I am responsible for quite a number of people already. So it all depends on how it plays out.