Is there any hope that the Chinese will ever be free of this censorship...

Even my Chinese-American friends are scared of the Chinese government

If this is genuine, then the early videos of the medics also fit better in the whole picture😔

Remember the cruise ship Westerdam, which no country would allow to dock until Cambodia allowed it? One of the passengers who disembarked has been detected with coronavirus. Over half of the passengers have already left the ship. h/t @HannaK50791603 https://t.co/sQQNqQJaix

How did they make the test in Cambodia for alla passenger in 1 day?! And now 1 US citizen positive is stock in Malesia

WHY WUHAN? The Nikkei says it strikes at the heart of “Made In China 2025”

Julie Ball, a former resident of Wuhan, helps us connect the dots. No, there is no smoking gun. Just food for thought…

Julie Ball: || There’s a lot more to this US battle with Huawei than cell phones. It has to do with warfare, Charles Lieber…and also Wuhan. Wuhan? Yes, Wuhan. But not in the way some Youtubers may think…

OK, people might wonder why I say the US military industrial complex and the neocons are freaking out about 5G and cell phones. It’s more than just cell phones. The technology that China is working on will, in the view of the US DoD, change the nature of warfare forever. It’s a big flipping deal.

According to a White House Defense industry report, "Another concern are China’s advances in “foundational dual-use industries such as semiconductors, chip materials, robotics, aviation and satellites,” the report says. As technical innovation moves abroad, “changing rules around intellectual property development will impede U.S. access to the latest manufacturing technologies.” At risk is America’s loss of leadership in industries of the future such as artificial intelligence, quantum computing and robotics, the report notes. “Over the remainder of this century, these emerging industries will help redefine the BATTLEFIELD.”

Charles Lieber, chair of Harvard’s department of chemistry and member of the China’s Thousand Talents Program. who was doing research with the Wuhan University of Technology didn’t get unjustly arrested for nothing. They say he was covering up ties to China. How ridiculous! His name was probably listed on the Thousand Talents website. FBI doesn’t have the internet, or what? For working with the Thousand Talents Program and developing nano-batteries and nano-tech. with the University of Technology in Wuhan (NOT the University of Virology as some have been saying on Youtube), which is the pilot city for the “Made in China 2025” The same initiative that the US Sec of Defense freaked out about to the Armed Services Committee. Oh that’s funny… Wuhan, did you say? I heard about something going on there recently in the news. Yes Wuhan.

In 2016, the Chinese designated Wuhan as the model city for the roll out of the digital Silk Road and AI and 5G and the Made in China2025 Initiative. China’s Ministry of Industry and Information Technology to give Wuhan all priority for all resources, projects and programs. This is a big threat to the US military-industrial complex. So Wuhan keeps coming up, doesn’t it?

Julie Ball: || Why would the US want to target Wuhan? This is why and it aint about cellphones. They see the 5g research and rollout in Wuhan as… and I quote, ‘a national security threat’ and ‘we must act aggressively’. Wuhan, the capital city of central China’s Hubei Province, was approved by China’s Ministry of Industry and Information Technology as a pilot city for the “Made in China 2025” plan, said Wuhan Commission for Economics and Information Technology on December 8, 2016. In March of 2019, acting defense secretary Patrick Shanahan noted a number of Chinese government initiatives that seek to enhance Chinese influence globally. He said. “With initiatives like the Digital Silk Road, Made in China 2025 and Thousand Talents Program in play, which spur companies and individuals to carry out its bidding, China aims to steal its way to a China-controlled global technological infrastructure, including a 5G network,” he told the Senate Armed Services Committee." This a technological arms race. Before you call me a ‘conspiracy theorist’, I said ‘why would they want to’, not ‘why did they’.

Oh and Charles Lieber, chair of Harvard’s department of chemistry and member of the Thousand Talents Program doing research with the Wuhan University of Technology. gets arrested last week… just BTW 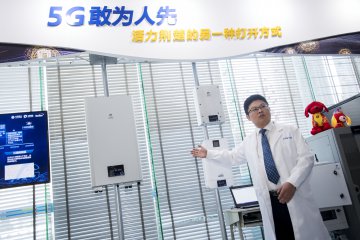 Hubei sets up over 300 5G base stations_Xinhua Finance Agency Wuhan lockdown strikes at heart of 'Made in China 2025'

Government goes all out to keep semiconductor and steel production rolling

#中共國 瘟疫大乱斗，在一场豫剧的伴奏下进行！# 中国 共 国 The plague of the plague is carried out under the accompaniment of a Yu opera!

#觀點 这是一堵墙的问题吗？
不！这是一堵心墙的问题！#Opinion Is this a problem with the wall?
Do not! This is a question of a heart wall!

A woman chops someone with a kitchen knife

#資訊 4000億「蝗軍」已經到阿三家蹭飯了，你們你們囤糧了嗎？蝗軍眼裡沒有國界，只有農田，糧食。#Info 400 billion “Locust Army” has come to Asanjia to eat rice. Have you stocked up your food? In the eyes of the locust army, there are no national borders, only farmland and food.

This is a good policeman you enjoy serving the people

Just interesting how the Chinese are reporting it

The locusts infestation in Africa/Asanjia

David how do I look?

Ok we are caught up

Niubi. Waiting for the virus to break down. The CCP collapsed first.

This guy is making the best of Quarantine with the kids

After the outbreak in Wuhan, Chinese unions locked farmers in their homes during the crucial February of farming. Winter wheat cannot be managed and spring wheat cannot be sown. It is foreseeable that food crops will decrease by 2020. It is only a matter of time before the food crisis breaks out.

It’s not just wheat farmers in China, try to imagine the other industries that will be and are being disrupted

Take advantage of these 2 weeks Economic fallout from China’s coronavirus mounts around the world

Big ones, lot’s of proteïnes in them😳

Communism is the enemy of all mankind