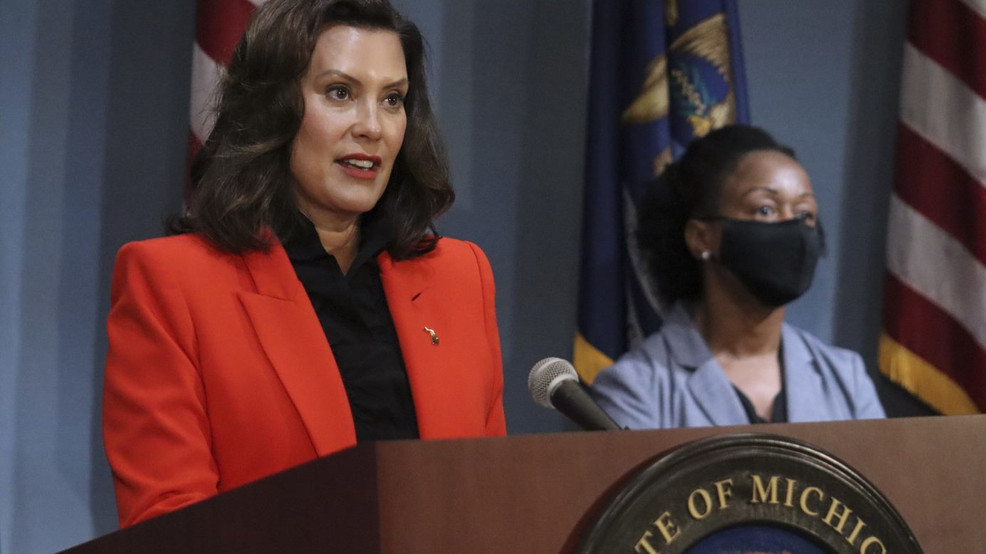 Gov. Whitmer vetoes bill to preven COVID-19 patients to be housed in nursing...

In this case it’s all about the money.

Mysterious genomic research, which overlaps with the development of an equally mysterious Russian vaccine by the Gamaleya Institute, resumed in 2015 after the scandalous speech of the head of the Kurchatov Institute, Mikhail Kovalchuk, in the Federation Council, where he told senators everything that he had been telling his students for many years — that US was trying to create the race “service people”, trying first of all to enslave Russia (wonder why not China?)

The main theses of Kovalchuk’s speech:

after WWII, humanity began to live too well and consume too many resources

if at least one country in the world, equal to India, reaches the same standard of living as America was 60 years ago, energy and economic collapse will occur in the world

civilization must save wheel, fire and return to primitive existence

humanity consumes too much oxygen

invention of steam engine and electricity are antagonistic to nature

Russia will can’t survive without army

only atomic weapons enable Russia to survive as a sovereign state; the atomic bomb made Russia a superpower and made it possible to survive; atomic wars — a new cycle of civilization

in Arctic Russia out of competition, thanks to nuclear projects

world computer technologies emerged only thanks to Russian atomic projects

artificial living biosystems with desired properties — potential bioweapon; a self-developing cell with given genetic code is weapons of mass destruction

US seeks unilateral possession of technologies for influencing consciousness

the Kurchatov Institute has created the world’s only source of synchrotron radiation, a neutron research reactor, a supercomputer and a complex of biogenetic neurocognitive research

Germany - American colony, since it serves the global interests of US from its budget

scientific and technical global goals are understood only by US, which wants Russia to also become a supplier of intellectual resources and an executor of US tasks at expense of its budget

US uses the results of scientific achievements of the whole world, they control everything

Russia will create its own, the most powerful particle accelerator reactor in the world together with Italy

US elite is now the only one in the world that has technical ability to create genetically modified people, a subspecies of homo sapiens “service man”

to create “service people”, US destroyed basic human values, imposed “individual freedom” on the whole world, which is a threat to statehood (in Russia, the state always prevailed over the individual)


. still looking for any solid rebuttal against the claims of this site

Where did the concept of Genome Russia come from, around which there are so many dances with a tambourine and on which oligarch Kovalchuk’s brother (Mikhail Kovalchuk, head of the Kurchatov Institute) and Putin’s eldest daughter are going to launder billions of budget money

It turns out that work on decoding the Russian genome was done by physicists (?!) of Kurchatov Scientific Center back in 2008…
The head of the genomic direction of the Kurchatov Institute, academician Konstantin Skryabin, said in an interview with ITAR-TASS in 2009 that the project to decipher the Russian human genome took… only six months!

From history of question:
The first was deciphered by the gene of Nobel laureate, one of the discoverers of the structure of DNA, James Watson, as well as of biologist Craig Venter. Later, the DNA sequences of the Asian and African people were determined. A total of eight individual genomes have been decoded to 2009

Molecular biologist, geneticist, Doctor of Biological Sciences and Professor of the Russian Academy of Sciences Mikhail Gelfand explained that genome of Russians is no different from genome of Europeans and only slightly differs from the genome of the Chinese.

— In fact, there is no discovery here, — says Gelfand. — It only means that devices that Kurchatov Institute purchased in US long ago for decoding genomes are finally started working. In international scientific databases, where all the data on the decoding of genomes are received, no traces of this project could be found. But about billions of rubles spent had to be report back somehow…

For forty thousand dollars in US, anyone can go and order their genome. And he will also receive a booklet with a description of his genomic characteristics. These are all open technologies.

Until recently, there was no genomic direction at all at the Kurchatov Institute. However, the peculiarities of modern Russian state policy are that in Kurchatov Institute should be everything. Of course, such political decisions are accompanied by large PR emissions. Now there are nanotechnologies (which, true, were bought abroad), biotechnologies, which are made on nanotechnologies bought abroad, a synchrotron, which formally works, but there are no results yet… There is a supercomputer that was reportedly used to decode the gene.

Who and why needed the project “Russian genome” - after all, Russia is a very multiethnic country, more than 100 ethnic groups live on the territory of Russian Federation
It turns out everything is very simple - the announcement of this scientific “breakthrough” added weight to Putin in the political arena. After this “secret discovery” Russia nominally entered the club of those countries that can do such grandiose genomic projects. By 2009, the genome of an African, a genome of a Chinese, two genomes of Europeans and one genome of a Korean were decoded. And Russian genome! But there are still no traces of Russian genome sequencing in the scientific literature…

, a lot of water has flowed under the bridge and even more budget money — but finding traces of decoding the “Russian genome” in scientific publications is so far as difficult as looking for a black cat in a dark room.

An article published in Science Direct in January of this year under the heading “Genome-wide sequence analyses of ethnic populations across Russia” says literally the following:
The Russian Federation is the largest and one of the most ethnically diverse countries in the world, however no centralized reference database of genetic variation exists to date. Such data are crucial for medical genetics and essential for studying population history. The Genome Russia Project aims at filling this gap by performing whole genome sequencing and analysis of peoples of the Russian Federation… Population genetics analyses revealed six phylogeographic partitions among ethnic groups"

But farther, when we try to follow the link to “genetic variants”, for some reason we get… on “Genomics in the common carp” and 'Marine Ecosystems" (??!)

Inevitably, the question arises: what damn them is Putin’s daughter doing under the roof of Kurchatov Institute, which is roof under “Putin’s favorite physicist” - only by money laundering or genetic experiments in the style of “Doctor Moreau"?

Kovalchuk (the head of Kurchatov Institute) blames the US in responsibility for all today’s Russian genetic developments, becouse according to him (this is the opinion of the Kremlin and Putin) US desire to enslave Russia and the whole world
He said the US is doing genetic research to create a special race of “service people”
This is a very scandalous video

we almost vomited while translating this shit! It’s sick

For this fucking speech Mikhail Kovalchuk received a medal and a state award.

It’s sick, no wonder Celebrities and Elites are into Stem Cell creams etc… Russians have been calling them out for years.

Since 2009 ⬆️, a lot of water has flowed under the bridge and even more budget money — but finding traces of decoding the "Russian genome" in scientific publications is so far as difficult as looking for a black cat in a dark room.
miette057 (D) August 1, 2020, 11:11pm #4

Hey @Insider20 - do you have more info on this part? I need to look into this further!! Thank you - brilliant work as always!!

Study: A plunge in incoming sunlight may have triggered “Snowball Earths”

⤻ reposted @miette057 to Hey @Insider20 - do you have more info on this part? I need to look into this further!! Thank you - brilliant work as always!! 🙏🏻💜

We’re creating the metaphorical Tower of Babel, the myth of Kid Icarus, Atlantis… it’s in all the mythos.

Man wants to supplant God/nature and this arrogance leads to his fall.

⤻ reposted @AzazelNews to Since 2009 ⬆️, a lot of water has flowed under the bridge and even more budget money — but finding traces of decoding the "Russian genome" in scientific publications is so far as difficult as looking for a black cat in a dark room.