Concerning that they even published this

Concerning that they even published this How long can you survive without water

Water is one of the vital ingredients for life on Earth, but what happens to us if you suddenly can’t get this precious liquid?

⤺ reposted by @NextLevelfinancial from A reminder from #LASD: Don't give criminals free information about yourself or your family by the way of bumper stickers or decals.

A reminder from #LASD: Don't give criminals free information about yourself or your family by the way of bumper stickers or decals.
NextLevelfinancial (Ryan Brown) October 21, 2020, 4:15am #2

On sale now and in stock

Unusual Low Tide Ecuador-10/20/20
There’s no full moon or wind.
The region is under alert as the sea retreated 5 days ago, inexplicably.

Alarm in Santa Rosa because the sea dried up more than normal
In the fishing port of Salinas they pray that there are no shipwrecks and no fishing moves away. When the tides do occur, the sea does go down, but not as much as now. Furthermore, it is only three days, this time there are already five," said at noon today, October 20, 2020, Wilmer Pozo, one of the fishermen from Santa Rosa, in Salinas, when they saw how the area where the boats cordon off in this port looked dry. The phenomenon alarmed artisanal fishermen. Some superstitious people fear that something bad may happen in the next few days. “Sometimes, when the sea goes too low, after a few days it gets rough and shipwrecks occur, fishing also moves away ,” said Manuel Borbor, one of those astonished.
The artisans, who used small boats from the shore to get to their boats, this time they did it on foot. “Diosito, that is nothing bad, I hope this does not bring serious consequences,” murmured the craftsman Jacinto del Pezo , while he walked to repair a net in one of the fibers. Captaincy of the Port of Salinas, through a press release, reported that this week there is a new period of watering and the sea will remain slightly rough . He asked those who work at sea to be careful.
But unlike Santa Rosa, where the sea was collected, in Libertador Bolívar, north of Santa Elena, its residents were alarmed by the strong waves that removed the rocks from the rock that protects the Malecón area. 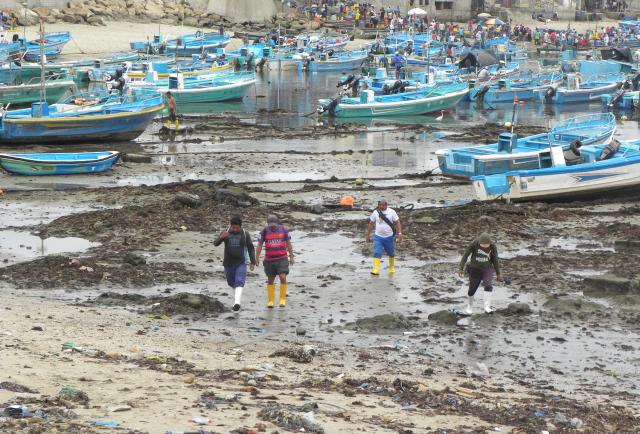