Most Americans are still asleep

The Europeans are not 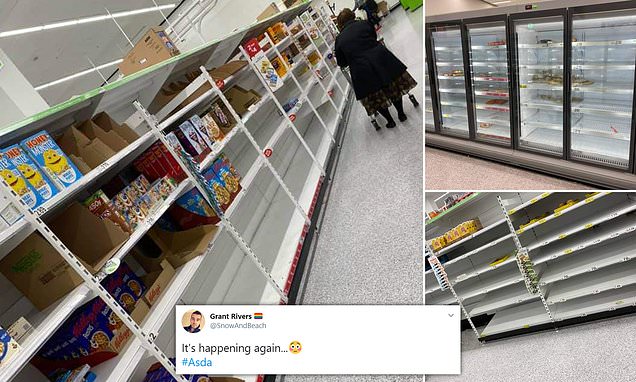 Shoppers took to Twitter to share pictures of their local supermarket shelves which had been stripped bare. Fears of a second wave of coronavirus appear to be fuelling the return of panic-buying.

Go check out your local Goodwill, Salvation Army, or locally owned and operated thrift store to hunt down SHTF supplies.

See what you can find to put your upcycling skills to the test. Can you repurpose what you find?

This will be an important skill to cultivate in the event of an emergency or a supply chain collapse.

Take the challenge and practice now while you have time.

People in Hurricane areas know this too well

You might have a generator but you hook it for some lights and the fridge. If its really powerful maybe AC or fans, but the little electric appliances cannot be used

Things like pressure cooker that can be place over charcoal

Starship Troopers: US Air Force CV-22 Osprey converters are involved in the United Efforts 2020 exercise in the Lviv region of Ukraine
Servicemen of the Special Operations Forces of the Armed Forces of Ukraine, together with soldiers of American special forces, worked out a parachute-free landing from the CV-22 Osprey tiltrotor aircraft of the USAF
#USA #Ukraine #NATO

Not surprising
Half of NATO is in the Ukraine

As of the end of August there were 6,451 total business closures, of which 3,499 were permanently closed (54%). The share of permanent closures within bars and nightlife have increased by 10% since our Economic Average Report in July. Retail and shopping follows closely behind restaurants with 30,374 total business closures, 17,503 of which are permanent (58%). Similar to bars and nightlife, the share of permanent closures increased by 10% since July. Both men and women’s clothing, as well as home decor, have the highest rate of business closures. The beauty industry has seen a 22% increase in closures since July, totalling 16,585 closures. Of all closed businesses in the beauty industry 7,002 won’t reopen (42%), a significant 43% increase since July when we reported that 4,897 of all closures in the beauty industry were permanent. Similarly the fitness industry has endured a 23% increase in closures since July, with 6,024 total closures, 2,616 of which are permanently closed. Even as the pandemic spreads nationally, geographically Yelp data shows business closure rates vary across the country. Bigger states and metros with higher rents and more stringent local operations for small businesses throughout the last six months have felt a greater toll. So have businesses more closely linked to physical locations that require crowds of consumers to attain profitability. Meanwhile, smaller cities and solo operations that can do their work one-on-one or virtually have proven better positioned to stay in business. For the states with widespread business closures, the economic struggle appears to be closely coupled with unemployment rates. Hawaii, California, and Nevada have the highest rate of total closures and permanent closures – they’re also the three states with the highest unemployment rates, and among the biggest states for tourism. Meanwhile, West Virginia and the Dakotas have the lowest closure rates. The states with the most closures are home to the hardest-hit metros: Las Vegas in Nevada, Honolulu in Hawaii, and several of the largest California urban areas all are among the metro areas with the highest total closure and permanent closure rates (San Diego, San Francisco, San Jose, Los Angeles and others), with roughly 20 businesses per thousand temporarily or permanently closing their doors since March 1. Larger metros with far fewer closures tend to be in the East, including Pittsburgh, Philadelphia, and Baltimore, all with closure rates below 10 per thousand.

Kiev is shrouded in poisonous smog
The cause was a fire at the landfill that occurred on the eve of September 20. The fire covered an area of 500 sq.m.
Residents were advised to stay at home, and children were allowed not to go to school
#Ukraine #Kiev #fire

Buy classico pasta sauce and dig these out of the trash every chance you can get. They’ll serve your family for a lifetime or more as a pressure canning jar. If there’s a ball canning jar shortage this might be one of the only ways to get canning jars.

⤻ reposted @AzazelNews to I been putting my salt in these jars